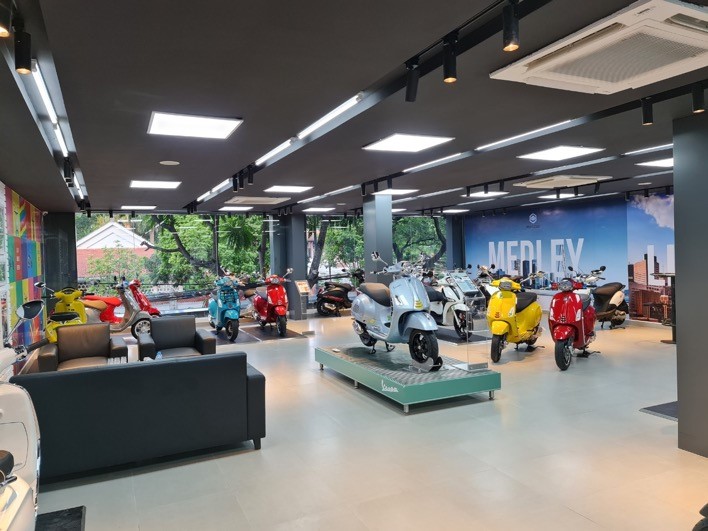 IMMEDIATELY IMPLEMENT AND COMPLETE 2 NEW DEALERS FOR PIAGGIO VIETNAM IN THE TIME OF LOCKDOWN!

On July 28 and August 4, Piaggio Vietnam welcomed two new dealers into the system, namely Dong Motor dealer – Da Lat and Minh Tam dealer – Thanh Hoa. The plan to deploy and complete the items for the two new dealers takes place in a very special time, when the epidemic situation is complicated and Hanoi is officially in lockdowrn according to Directive 16 of the Government.

In response to the epidemic situation, right from the beginning when the project was still in the design stage, AIT as the official supplier of equipment for the Advertising and Brand Identity Department, has prepared a full range of options, including a backup plan to be able to fulfill all customer requirements in time for the opening.

AIT’s leadership has directed production to be rushed, increased productivity and capacity of the factory, and sent staff to supervise construction and technicians to conduct thorough and methodical training for the AIT local partners team. Therefore, even during the time of social distancing, it is not possible to come to the construction site in person, AIT still ensures the highest progress and quality for the two new Piaggio Vietnam dealers.

The General Director of Piaggio Vietnam thanked the suppliers, including AIT, for their contribution to the success of the two newly opened stores during the nationwide quarantine period due to the epidemic and the very fast implementation, one store takes 1 month, the other store takes one and a half months to finish.

Once again, AIT would like to send congratulations on the opening to two dealers Dong Motor – Da Lat and agent Minh Tam – Thanh Hoa. These two dealers are part of Piaggio’s plan to develop new dealers nationwide, promising Piaggio’s breakthrough in the Vietnamese market in 2021, 2022 and the following years. Hopefully in the future, AIT will continue to accompany Piaggio, contributing to the development and success of Piaggio dealers in particular, and Piaggio Vietnam in general.

DEVICES AND PRODUCTS AIT MANUFACTURES AND PROVIDES IN THIS TWO PROJECTS!

+ A set of characters for Dealer Names and Authorized Stores